JS Bach beat Tiger of Wales by a neck in Wednesday’s feature race at the Gulfstream Park West meet, giving trainer Todd Pletcher his fourth win after 17 days of the meet.

Pletcher is tied for fifth place in trainer wins at the GP West meet, which Gulfstream Park is holding at Calder Casino & Race Course as part of a lease arrangement with that track. During the past week, several other prominent South Florida winter time trainers have joined him in running horses at the GP West meet.

Pletcher also sent out Wild Zambezi as a separate betting interest in the race, which was the fourth on Wednesday’s card. That horse finished fifth.

(Note: The photo in the Preview of this story is of Todd Pletcher at Gulfstream Park in March 2915)

The 3-year-old colts JS Bach and Wild Zambezi are among the first wave of horses that Pletcher has sent from tracks in northern states to the Palm Beach Downs training center in Delray Beach.

Pletcher has been sending horses south at a faster pace than usual. That flow will pick up even more starting in early November, including some of his top-tier horses. That indicates he could exceed the ten wins he had during last year’s eight-week GP West meet.

Most, like JS Bach and Wild Zambezi, are part of what can be described as Pletcher’s strong second string.

Meanwhile, we are hearing that Gulfstream has received more applications than the number of stalls it has available for its championship meet that will begin Dec. 7. Pletcher has led trainers in wins 12 consecutive times at those meets.

Gulfstream controls about 3,000 stalls. That is a combination of the stables at its track in Hallandale Beach and its affiliate Palm Meadows training center in Boynton Beach and stalls it has leased at Calder.

Other stalls could be available at training centers in South Florida.

Tampa Bay Downs also has more demand than stalls available for its meet that will begin Nov. 28. Some trainers will be able to find stalls at farms and training centers in Ocala, and van horses 100 miles to race at Tampa Bay Downs in Oldsmar.

He is in Lexington, Ky., for the Breeders’ Cup races that will be run this Friday and Saturday at Keeneland. He has 11 horses entered in BC races.

The Pletcher team has no horses entered Thursday at GP West, two on Friday and four on Saturday.

JS Bach had to battle back in the final yards to win Wednesday’s race. 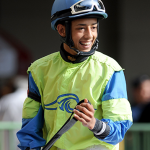 With Edgard Zayas riding, JS Bach took the lead coming out of the final turn and appeared to be pulling away.

But Tiger of Wales, the 8-1 second choice, rallied on the inside as JS Bach began drifting outward

Tiger of Wales, ridden by Tyler Gaffalione, took the lead about 100 yards from the wire.

JS Bach then re-rallied for his third win in four career starts. His other two wins and a second place finish were this year at Gulfstream Park.

JS Bach, a son of Tale of the Cat, is a Florida-bred homebred of Donald Dizney.

The second place finish was the fifth in-the-money showing for Tiger of Wales in ten career starts. He is trained by Mike Maker and owned by J. Armando Rodriquez Racing.

Pletcher and Maker can be expected to move JS Bach and Tiger of Wales to higher level optional claiming races.

That gives him 11 for the meet and places him third in jockey wins behind Gaffalione who has 17 and Zayas who has 16. Zayas rode two winners and Gaffalione rode one winner on Wednesday’s eight-race card.

For several years, Jaramillo has been one of the leading jockeys in Venezuela. He began riding in Florida during the recent summer meet at Gulfstream. He rode 19 winners at that meet, placing him 12th in the standings.

Jaramillo has been getting mounts from a wide variety of trainers, including some in the large South Florida contingent who are native Venezuelans.