Our Guide will have previews of and Equibase Past Performances for the two Sire Stakes races at Gulfstream Park this Saturday, Sept. 2.

To receive your free electronic pdf document for Saturday’s races, you will need to subscribe. It’s FREE.

Here is the link: Horse Racing FLA
And remember to confirm your e-mail delivery thro 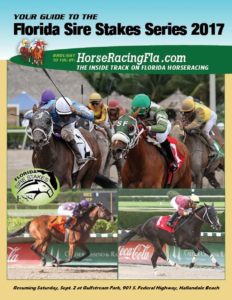 ugh your mail service after registering. Once we view your registration, we’ll e-mail you the Guide.

The free Guide will only be available to valued subscribers of HorseRacingFLA.com. Subscribe now and get the latest news for Florida horse-racing enthusiasts.

So don’t delay! Subscribe now to receive our Guide and get top horse racing news in your e-mail Inbox!  If you have questions, please e-mail our customer service department at HorseRacingFLA@gmail.com.
No comments:

We  said it might be a good day to try the Rainbow 6. Here is our mental bet

It's Study Time for the GP Rainbow 6

There is still time for some handicapping  of today's Rainbow 6 and Late Pick 5 at Gulfstream--on a day with better-than usual opportunities to be among multiple winners.

That is because three of the last six races have been moved from turf to dirt, with notice given before the  first race.  Late scratches reduced the number of  starters in the Rainbow 6 races from 53  to 44.

The Late Pick 5 begins with the seventh race.

There are still eleven  runners left in the 11th.

Basically, today could be a day to  jump into the Rainbow 6 if you are content to be among those sharing in the 56 percent of today's bets that will go back to bettors--if there is no single ticket jackpot winner.


For the fourth straight day, there will be no turf racing at Gulfstream Park.

On Sunday morning, Gulfstream listed its turf course as Good, with six races  scheduled for that surface.

Early this afternoon, Gulfstream moved those  races to the dirt track--listed as Fast. Not surprisingly, the dirt  has dried faster than the turf following three days of  rain.

The first, third, fifth, seventh, ninth and 11th races have been taken off the turf.

For updated scratches, we suggest that you turn to the Equibase web site and this link

Gulfstream Back on Turf for Sunday

Gulfstream Park is back on the turf for its Sunday race card.

We will have coverage during the afternoon on this blog.

From Thursday through Saturday, rain forced Gulfstream to  move all its scheduled-for-turf races to  the dirt track  that  was listed  as Sloppy and  was sealed.

Six of today's races are scheduled for turf, with the rail at 108 feet.

The Weather Channel forecast is for a  chance of thunderstorms between  25 percent  and 55 percent during racing hours.

Sweet Khaleesi turned the tables  on Money or Love on Saturday, beating her by a neck in the $50,000 Sugarloaf Key Handicap at Gulfstream Park.

Sweet Khaleesi took the lead after a half mile and held off a late run by Money or Love to win the six-furlong dirt stakes for fillies and mares 3-years-old and up.

Emisael Jaramillo rode Money or Love, who won in 1:10.34 on the track that listed as Sloppy and was sealed.

On July 29 at Gulfstream, Money or Love beat Sweet Khaleesi by a neck in the $50,000 Added Elegance Handicap at seven furlongs on dirt.

Emisael Jaramillo rode Sweet Khaleesi in the Sugarkoaf Key. He picked up the ride from Edgard Zayas, who was on board the 4-year-old filly in her three previous races.

Zayas was at  Saratoga Race Course on Saturday, and rode Gunnevera to a second place finish (behind West Coast) in the Travers Stakes (Grade 1).

The win on Saturday was the fourth for Sweet Khaleesi in fifteen career starts.
--Jim Freer
No comments:

Feature Coming up at Wet Gulfstream

The 11th and  feature race is coming up  at Gulfstream, on the sloppy and sealed dirt track.

It is the $50,000 Sugarloaf Key Handicap at six furlongs for fillies and mares 3-years-old and up.
We will have reports this evening and tomorrow.

Travers: Good Samaritan is Our Pick to Win

This year’s renewal of the of the historic Travers will showcase one of the most competitive groups to be found, outside of the Breeders’ Cup.

Not only does it feature all three winners of the Triple Crown races, there are at least a half-dozen other contenders capable of upsetting the twelve-horse field.

Picks 1 to 4
Here are four runners that appear to have the most going for them this Saturday, listed in order of preference. However, anyone of these (and others) could take it all.
Good luck, enjoy what should be a great race!

5 GOOD SAMARITAN  5/1   Can’t look past this one’s 4 ¾ length romp in the Jim Dandy, the traditional Travers prep. This son of Harlan’s Holiday’s future should be bright as a dirt horse.
All he did in his main track debut was score a daylight win over a pair of Triple Crown race winners (Derby & Preakness) and register a Grade II victory. A repeat of this performance could put him right back in the Saratoga winner’s circle.

Any improvement and the rest will be running for place. Bill Mott, Saratoga’s leading trainer in several past seasons, stated earlier this week “I wouldn’t trade places with anyone” when asked about Good Samaritan’s chances.
Veteran jockey Joel Rosario, his only rider, will be in the irons and they should get some pace to close into.

4  TAPWRIT  7/2   Ran the race of his life while taking the Belmont on June 10th, and earned the best last-out Brisnet figure in this field. Has been rested for eleven weeks (runs well fresh) and has five local works for world-class conditioner Todd Pletcher, currently winning at 29% at Saratoga, one of the world’s toughest race meetings.

A grey son of Tapit, he has had the best results when pressing the pace from a few lengths off the lead. This tactic worked in the Belmont where he broke alertly and was fourth, only 2 lengths off the lead at the first call. He maintained that margin and slowly moved up. As a result, he was in a perfect spot to go after the leader in the stretch. He could get a similar trip here, as his stablemate, Always Dreaming will be one of the pace makers.

6  GIRVIN  10/1  Here is a hard-hitting longshot that could be a spoiler. Has 4 wins from 5 tries on fast tracks and was a 9/1 upset winner of the Grade I Haskell on July 30 at Monmouth. It is noteworthy that he broke last in a field of seven and made up nine lengths on a track that was said to be favoring speed, and got up by a nose. In prior outings he has exhibited a versatile running style, able to attend the pace or rate and run late. This could serve him well in here, he could get first run when they turn for home. Joe Sharp has 20% repeat wins with his stock, winning rider Robby Albarado retains the mount. Worked a “bullet” 5 furlongs in 59.4 Breezing on August 19.

10  IRAP  8/1  Irap, a son of Tiznow, has acted like a different horse since trainer Doug O’Neil took the blinkers off for the Keeneland’s Blue Grass Stakes on April 8. The result was a wake-up win at 31/1. Since then he has had success in 2 of 3 Graded Stakes attempts.  His only hiccup was the Kentucky Derby where he had a rough trip in the slop, which is a throw out. After the Derby debacle, he was freshened for 6 weeks and then captured the Grade III Ohio Derby (and beat Girvin by a nose, his only dirt loss). Last time out he earned a 5 length tally in the Indiana Derby, also Grade III. Might be this good, has never run on the east coast.

Friday Racing Off the Turf at Gulfstream


For the second day in a row, racing is off the turf at Gulfstream Park.

For Friday the second, sixth and ninth races  have  been  moved from the turf  to the dirt  track that is listed as  sloppy.
First post 2:15 p.m. for a nine-race card.

We will have additional details and coverage starting early this afternoon on this blog.
No comments:
Newer Posts Older Posts Home
Subscribe to: Posts (Atom)