Today's Tampa feature comes in Race 8, Post time is scheduled for 4:08 PM. RadioStPete live coverage, including the call from announcer Jason Beam will start at 4:05.

A full field of ten three year-old and up Fillies and Mares will travel a flat mile on the lawn under $27,000 NW1X conditions. It appears that this will be a good betting race, with the money spread around on several contenders.

WHY NOT TONITE (10) tries the Tampa turf coming off a handy three length score over $16,000 condition claiming foes at Monmouth on September 5. She has been away from the races since then, but has been busy in the mornings, logging a half dozen works. The last pair were promising local efforts. Five furlongs in a "bullet" 1:01 flat, followed by four panels in a snappy 47.2. Trainer Jesus Cruz claimed her and wins at 24% after a claim. Top tier  turf jock Jose Ferrer rode her in her last victory and returns today. He is riding in top form now, going 3 for 5 on opening day. Alot to like here at 8/1 on the morning line.

Race 8 showcases a competitive group of three-year old and upward and promises to present a wide open betting affair. A field of eight will sprint seven panels under $16,000 NW1X conditions. Post time is scheduled for 4:06 PM.

LITIGANT (2) is the runner who could pull an upset at a square price. This five-year-old gelding from the Gerard Ochoa barn sports a record of four wins from seven starts at the tricky seven furlong distance. He also likes the Oldsmar oval, being five for ten in the money, including a trio of wins. He reunites with regular rider Ronald Ordonez, they had a pair of victories in Tampa last season. This one has a good turn of early foot and should be prominent from the onset. Worth a bet at 12/1 on the morning line.

Live racing coverage including the call of announcer Jason Beam begins on RadioStPete.com at 4:03 PM.

PREVIOUS RESULTS  Lost $38 on Wednesday's card. It's a marathon, not a sprint.

Tampa Bay Downs opens the ninety day winter/spring season today with a nine race card. The first post time is scheduled for 12:43 PM. The main track is fast and the turf course is firm. 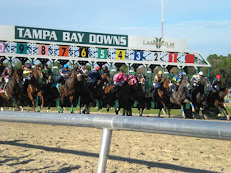 Today's play is in Race 5, Post time 2:43 PM, the first grass contest of the season. A well matched group of three year-olds and up will go one mile and a sixteenth under $16,000 Claiming conditions.

PROJECTED (2) deserves top billing here. This ultra consistent gelding has finished first in five of his last six starts. Any of the figures earned for all of his turf route efforts are enough to win this. He was claimed by the powerful Darien Rodriguez barn out of his last race (36% winners after a claim) and appears ready for his first try on the Tampa sod.

Live coverage on RadioStPete.com including the call from announcer Jason Beam starts at 2:40 PM.

Go to RadioStPete.com and HorseracingFLA.com for the Race of the Day coverage for Tampa Bay Downs every racing day.

Gulfstream Park's Saturday race card has a mandatory payout on the Rainbow 6 and track officials expect a pool around $3 million. First race post time is planned for 12:30 PM. Race 10 will post near 5:10 PM.

The carryover coming in is $450,474. Gulfstream Park expects about $2.5 million to be wagered due to the increased interest in the mandatory payout today.

The jackpot payout will the entire carryover plus 80% of the Rainbow 6 wagering.

Gulfstream will divide that jackpot amongst the winners of the six races.

On most days with multiple winning tickets, Gulfstream makes that payout to the winners of the Rainbow 6 wager.

Gulfstream Park will have a Rainbow  6  carryover of $405,484 when it resumes racing on Thursday.

The Hallandale Beach, Fla., track will have eight races with first post of 12:30 p.m.

Thursday's first race has a carryover of $2,240 on the Super Hi-Five wager.

The Rainbow 6 will be on races three to eight with the sequence scheduled to start at 1:25 p.m.  It is a 20 cents per combination-only bet.

The carryover has grown since 20 race days have elapsed since the last winner. A single winner is needed to collect the entire carryover plus 80% of the race days wagering. Gulfstream receives 20% of the wagering as its takeout.

It will be day 25 of the track’s Flamingo Festival; which runs through Nov. 21st.
There are no stakes races on the card planned.

This will be day 18 of this Rainbow 6 sequence that started back on October 10th. We’ve had two 5 of 6 payout days during that time frame.

Thanks for reading, and good wagering!

Gulfstream Park has a nine-race program on Sunday with first post at 12:30 p.m.

The Weather Channel forecast is for a less than five percent chance of rain during racing hours.

The Sunday  card has no  stakes races,

Today is Breeders’ Cup Saturday, and also a stakes day at Gulfstream Park; and a big carryover on the Rainbow 6.

The tenth and feature race at Gulfstream Park is the Showing Up Stakes, a $65,000 race at 1 mile and 70 yards on the all-weather Tapeta track.

It’s on races 6-11 with the sequence starting at approximately 2:52 PM.

Gulfstream will have simulcasting of all 12 races at Del Mar track in Del Mar, Calif. The last 9 races are Breeders’ Cup races. The 12th race is the Breeder’s Cup Classic at 1-1/4 miles on dirt for 3 year-olds and up.

The scheduled post time is 8:40 PM EDT for that race.

This link to the Equibase Web site has the Gulfstream entries for Friday. It will update for scratches, It has drop downs for handicapping material. Some is free. Some, including past performances is at cost.

Of the four remaining races, the seventh and ninth are on the dirt track that is listed as sloppy and is sealed.  The eighth and tenth races are on the All-weather Tapeta track.

Gulfstream Park will have ten races on Friday, with first post at 12:30 p.m.

Friday is the  first day of the 2021 Breeders' Cup at Del Mar in Del Mar Calif.

Gulfstream and Tampa Bay Downs will both have simulcast betting on the full Del Mar cards on Friday and Saturday.

Beginning this afternoon we will have coverage, including previews, of Breeders' Cup races.

On Friday at Gulfstream, the only carryover is $225,126 on the Rainbow 6.  The 20 cents per combination-only  bet is on races five to ten with the sequence scheduled o start at 2:26 p.m.

Horses at low odds won the third and fourth races at Gulfstream Park on Thursday--to start the late multi-race bets with large carryovers.

This evening, we will have a recap and other Gulfstream news.