There are dozens of ways to plot out bets on the burgeoning Rainbow 6 at Gulfstream Park.
Here is one Moby Dick-sized whale of a strategy, and some thoughts on how it might impact the Rainbow 6.

Following the morning’s scratches there are 56 runners in today’s Rainbow 6 races, and the cost of “buying” it would be $122,472.

Possible Scenarios
If the ALL strategy produces the only ticket with the winners in all Rainbow 6 races it would collect a jackpot payout in the $3.9 million to $4.0 million range,

But if there are multiple tickets with all six winners, the $123,000 ticket and the other tickets would divide a payout that likely will be in the $350,000 range.

That is based on an assumption that about there will be about $600,000 bet on the Rainbow 6 today. On multiple winning ticket days, 56 percent of the day’s bet is divided among those tickets.

Then again, more than one team might take an ALL each race plunge today or some other day soon. In that case there would be multiple winning tickets, and thus an extension of the carryover with no jackpot payout.

Meanwhile, today’s payoff per multiple winning ticket would be considerably lower than $120,000 if there are no longshot winners in any Rainbow 6 races,

For example, on Wednesday all winners in the Rainbow 6 races were at 8-1 or lower. There were multiple winning tickets, with each paying $1,323.78. By our calculation, there were 234 such tickets.

There were no Rainbow 6 tickets with all six winners. The pool was $469,808 and Gulfstream divided 56 percent of it among tickets that had five winners. 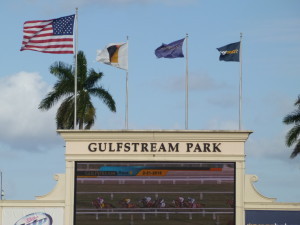 Each received $584.54—a good-size and non-IRS event for small bettors but a loss on investment on whale-size tickets.

On days when there are tickets with all six winners, there are no consolation payouts.

Yesterday’s Late Pick 5 pool was $127,139.  Our research indicates that it is not being cannibalized as betting grows on the Rainbow 6.

The results of the last two days indicate why a Rainbow 6 plunge can be akin to a game of Russian roulette.
What's Ahead
But for any “giant whale” syndicates, today might be a day to go with a huge bet.

Naturally, the cost of fully covering all races grows significantly as the number of starters grows.

So, today might be a day when some syndicates go ALL in say four races with three or so horses in the other two—strategically tossing a few to reduce the cost.

The carryover is growing because Thursday was the 45th straight day without the jackpot-paying requirement of just one ticket with the winning horses in all six races.  Our research indicates that is among the three largest carryovers in the six-year history of the Rainbow 6.

Gulfstream has set Saturday March 26 as a mandatory payout date for the Rainbow 6 jackpot, even if there are multiple winning tickets that day.

If the carryover extends until March 26, we are among those who expect that betting on the Rainbow 6 could be as high as $10 million that day.
--Jim Freer and Barry Unterbrink