After being dark on Monday and Tuesday, Gulfstream Park  will resume racing Wednesday  with ten races and first post of 1:10 p.m.

Starting this week, Gulfstream will have these first post times, unless otherwise noted, for the rest of its championship meet that will end on March 28 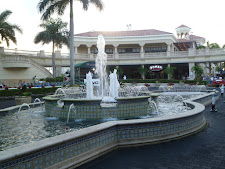 The Wednesday carryover on the Rainbow 6 is $368,508.  The 20-cent per combination-only bet is on races five to ten with the sequence scheduled to start at 3:10 p.m.

Gulfstream is guaranteeing that the Rainbow 6 will have a jackpot pool of at least $700,000 if there is just one ticket with the winners of all six Rainbow 6 races.

The jackpot consists of the entire coming-in carryover plus 80 percent of the day's new Rainbow 6 bet.

Following a cool morning, by South Florida standards, the Weather Channel forecast is for temperatures in the mid 60's and a zero percent chance of rain during racing hours.

This link to the Equibase Web site has the Gulfstream entries for Wednesday. It has click-ons for handicapping material.  Some are free. Some, including past performances, is at cost.

Wednesday's featured ninth race is an allowance/optional claimer at seven furlongs on dirt for fillies and mares 4-YO and up.

We will have a preview and coverage this afternoon on this blog.

Entries will be announced on Wednesday afternoon for Saturday's two stakes races.

The $100,000 Ladies' Turf Sprint will be five furlongs on turf for fillies and mares 4-YO and up.

Wednesday will be the 45th  day of the 84-day championship meet.

Luis Saez and Paco Lopez are tied for second place with 55 victories. They are followed by Edgard Zayas with 50 and Tyler Gaffalione with 47.

Defending champion Todd Pletcher leads trainers with 33 wins. He is followed by Saffie Joseph Jr. with 27 and Michael Maker with 24.