The Downs has a nine race card on tap for Wednesday, January 5. The first Post time is scheduled for 12:20 PM.

The feature is Race 5, Post time is 2:18 PM. A full field older Fillies and Mares will go a grassy mile under $16,000 open company Claiming conditions. Live coverage on RadioStPete.com, including announcer Jason Beam starts at 2:15. 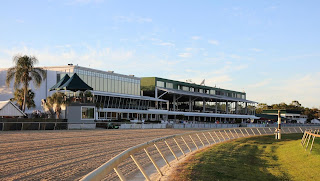 CEFALO (3) looks to be the one to catch, coming off a handy four length wiring of condition claiming foes at Woodbine (Canada) on December 2.

That seven panel Synthetic track win shows that this five year-old Mare is in top form, earning the highest figure in her career. She has an early pace advantage, has won on turf before and should be in front early saving ground on the inside under top jock Antonio Gallardo.

Her trainer Barrington Siddo, new to Tampa, has stats of 25% winners with claiming repeaters. An old horseplayer's saying warns to "beware of the stranger".