Friday at Gulfstream: Back on Turf; Pletcher 3-YO Filly Entered in Optional Claimer

Friday, Sept. 18 — Gulfstream Park’s ten-race card is underway with today with the main track and the turf course are listed as good.

Five races are scheduled for turf on the card that got underway at 1:15 p.m.

Isolated and heavy thunderstorms are in the forecast for the Miami-Fort Lauderdale area between 2:00 and 5:00 p.m.

On Thursday, following overnight and morning rain, all four races scheduled for turf were moved to the main track that was listed as sloppy.

Today’s seventh and feature race is a $16,000 allowance/optional claimer for fillies and mares3-years-old and up, with a $44,000 purse.

Kinsley, trained by Todd Pletcher, is among likely favorites in the 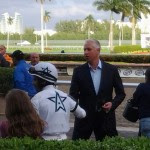 six-horse field. None of the entrants are in for a tag.

Kinsley is the second horse run by Pletcher in Gulfstream’s summer meet that will end on Oct. 3.

It is expected that Pletcher will soon begin sending dozens of his horses from northern tracks to his winter base at Palm Beach Downs in Delray Beach.

Gulfstream’s only stakes race this weekend is Saturday’s $75,000 Treasure Coast, at five furlongs on turf for 3-year-olds and up. We will have a preview on Saturday morning.

Friday at Gulfstream: Back on Turf; Pletcher 3-YO Filly Entered in Optional Claimer